I have an unusual confession to make. I’m about to get real honest with you in a way that is probably going to – no, it’s definitely going to make you wonder why I’m even sharing a banana bread recipe in the first darn place.

But first, a little context for why my confession is bound to be a head-tilter …

Did you know that home bakers search ‘banana bread recipe’ online more than any other type of bread?

The nation – the world? – became obsessed with It during the pandemic, rocketing the sweet quick bread to social media stardom with 1.9 MILLION posts under #bananabread and an additional 44,600 posts fighting for attention under #bananabreadrecipe.

Everyone, that is, except for this person at Delish who believes our current banana bread obsession is just sad and boring people doing sad and boring things (we’re not and it isn’t, Miss Tess Koman. Hmph!)

My preferences lie in the pillowy softness of a brioche, the chewy tanginess of sour dough, the rich buttery flavor of a croissant, the crispness of a baguette. Challah, ciabata, focaccia, pita, even cornbread … I love just about any kind of bread.

Traditional banana bread is SO mushy! I need a huge mug of coffee and a lot of butter to get it down. It barely even tastes like banana and the bottom always has this weird spongey consistency with less flavor than said sponge.

It doesn’t matter where I’ve tried banana bread, from high end bakeries in Hawaii to small breakfast joints in rural New York or even baking it at home. It was always the same problem. Flavorless mush.

homemade banana bread is both art and science

We had a big bunch of bananas that were sitting on the counter getting very, very brown. So, in spite of my dislike for banana bread, I do enjoy baking, and my husband enjoys banana bread, so I decided our plethora of browning bananas would be the perfect opportunity to do some experimenting and see if I could create a loaf that I DID like.

I went through a few loaves with varying levels of failure, from epic to won’t-win-a-beauty-pageant-but-tastes-amazing.

This ugly little loaf was the one that told me I was onto something.

The sunflower pips burned, the almond flour refused to rise, and it wouldn’t come out of the pan.

But. It. Was. Delicious!

So I made another loaf, with a few changes like using all-purpose flour (almond flour was a bit ambitious for me) and ditching the sunflower pips.

Still, I was a bit reluctant to share the recipe because I honestly didn’t know if anyone else would like it. I know I like stronger flavors and more texture and figured that while I loved the bread, it may not suit most people’s preferences.

I baked up a loaf for visiting family who each have very different taste preferences.

The first loaf barely had time to cool before there was a line of people with a plate in hand. Some took half a slice, some took a full slice, and all went to sit downstairs to eat and watch a movie … and each one quickly returned to claim a second slice before they were done with the first!

The secret to the best homemade banana bread is …

Freeze and thaw your bananas first!

This breaks down the cellular structure, releasing a ridiculous amount of syrupy sweet juiciness that makes the bread explode with banana flavor!

Bananas can be frozen for up to 6 months so you can always have a few in reserves, but use them quickly once they have been thawed.

Use dark brown sugar instead of white!

Brown sugar is white sugar with molasses, which makes it a sweet yet savory swap for elevated banana bread.

It adds depth and sophistication to the flavor that white sugar just can’t match and compliments the warm spices used in this recipe beautifully.

Note: I messed up and photographed 1/2 cup, but use 1 cup for this recipe!

Use a Butter With High Butter Fat %!

I decided to try a sea salted butter with high butter fat content over unsalted table butter, and wow! It imparted a noticeable butteriness, a silkiness, and a robustness that transformed it to a luxury experience.

Vital Farms butter is a gorgeous deep yellow and stays firm at room temperature, which is great for creaming and the adorable packaging makes the experience even more enjoyable. 🙂

I accidentally used 1 cup instead of 1/2 cup in one bake and my husband said he liked it even more! The extra .5 cup made it take longer to bake and it wouldn’t stay together, but I agreed that the added tanginess and moisture was really delish!

It’s totally worth it to use more than a 1/2 cup if you don’t mind using a fork to eat the bread!

I used Ghiradelli 60% cacao bittersweet chips. They are huge and bake in phenomenally well. They stay firm but not too firm, adding a delectable texture and not-too-sweet chocolate flavor.

An earlier experiment used Toll House because that’s what we had on hand. Don’t get me wrong, it was still delicious, but Ghiradelli took it to another level!

Splurging on the good chocolate makes a noticeable difference.

Use Warm Spices and Use Them Generously!

I use vanilla extract, Saigon Cinnamon, nutmeg, and allspice in this recipe, but experiment with any combination of warm spices like ginger, coriander, cumin, star anise, and cloves.

Use a Porcelain Ceramic Loaf Pan!

When I swapped out a steel or glass loaf pan for this ceramic pan, it baked up so evenly and gorgeously and was full of flavor all the way through.

That weird tasteless sponginess on the bottom that I despise was completely gone.

This photo was completely accidental! I was taking photos of the loaf and my husband was so anxious to dig in, that he reached over to steal a chunk off the top 😀 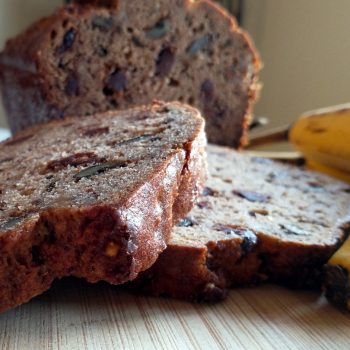 Cream the Butter and Sugar

Mix the Wet and Dry Ingredients Together

Pour into the Ceramic Pan

Put in the Oven

Previous postWelcome To Our New Home!

Next postWE BOUGHT OUR FIRST HOME! A FIXER UPPER IN THE HEART OF BOURBON COUNTRY

This site uses Akismet to reduce spam. Learn how your comment data is processed.

How do you feel about your home? Do you love it, or is it just ok? Or even something less than ok? I strongly believe everyone deserves to be in love with their home and I’m positive that every home can be easy to love when it reflects the people who live in it! As a REALTOR, Certified Professional Home Stager & Redesigner, and Certified Expert E-Designer, my mission is to help you say, “Heck yes, Amy Jae! I LOVE my home!”

Your home should be your happiest place and Home by Amy Jae is a new resource dedicated to helping you do exactly that! Whether you’re a hands-on DIY pro who loves getting inspired or you want a hands-off Amy-Jae-please-just-tell-me-what-to-do-and-I’ll-do-it approach, I’m here for you!

Start by browsing the different categories and choosing an easy breezy meal idea, a never-fail paint color, or even shopping a complete room design. (Coming Soon)

If you prefer personalized design assistance, visit the Work With Me page and select one of my affordable edesign packages. (Coming Soon)

Did you decide a new-to-you home in the Louisville area is the best move (pun intended)? Browse current local listings and reach out to me here. (Coming Soon)

Let’s get your house feeling more like home. Most importantly, let’s have fun doing it!

Here are some of my favorite links to get you started:

and this one! (Coming Soon)

This is highly recommended. (Coming Soon)

Where Are We With Grey in Interior Decorating?

Cardigans as a Functional Element

We use cookies on our website to give you the most relevant experience by remembering your preferences and repeat visits. By clicking “Accept”, you consent to the use of ALL the cookies.
Do not sell my personal information.
Cookie settingsACCEPT
Manage consent

This website uses cookies to improve your experience while you navigate through the website. Out of these, the cookies that are categorized as necessary are stored on your browser as they are essential for the working of basic functionalities of the website. We also use third-party cookies that help us analyze and understand how you use this website. These cookies will be stored in your browser only with your consent. You also have the option to opt-out of these cookies. But opting out of some of these cookies may affect your browsing experience.
Necessary Always Enabled

Performance cookies are used to understand and analyze the key performance indexes of the website which helps in delivering a better user experience for the visitors.

Analytical cookies are used to understand how visitors interact with the website. These cookies help provide information on metrics the number of visitors, bounce rate, traffic source, etc.

Advertisement cookies are used to provide visitors with relevant ads and marketing campaigns. These cookies track visitors across websites and collect information to provide customized ads.

Other uncategorized cookies are those that are being analyzed and have not been classified into a category as yet.